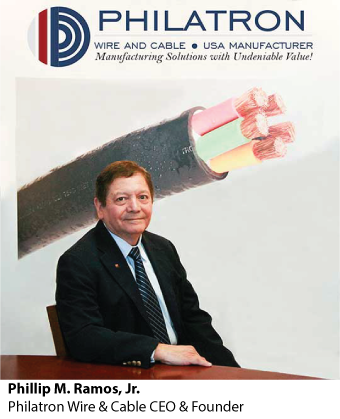 WJI: How did you get into the wire and cable industry?

Ramos: Back as far as high school, I always wanted to own a business. I was (and still am in a nice and friendly way) competitive. After graduating from high school I joined the U.S. Navy and advanced from a Seaman Recruit to a Petty Officer 3rd Class in less than a year. Two years later, I went to college and went to work in a wire and cable company as a floor sweeper. I soon advanced to operations manager, and by age 28 I was executive vice president and general manager for a start-up wire and cable manufacturer. I was doing well but I wanted to head out on my own. In 1974, at age 30, I started Philatron. Since then, I have been blessed to grow it into the largest wire and cable manufacturer in Southern California.

WJI: What were the keys to your success?

Ramos: I have always considered time, not money, as the most valuable asset, and that was the key to my start. I did not have a lot of money, but I knew that if I could sell a large quantity of products on a COD basis and have 30 days to pay my vendors, cash and funding would be moot points. And that is what I did. I started out not as a manufacturer but as a broker, hustling to get contracts where I could make money. I did that for a few years until I accumulated enough cash to start purchasing manufacturing equipment. My first extruder line (I now have nine) was purchased at an auction. It was new, kept in storage by the Army Signal Corps, and was worth $150,000. I got it for $10,000 and started manufacturing. Since then, I have either custom built or purchased 97% of our equipment from auctions or the used equipment market. And each time we consider a new purchase, there is a single question I ask myself: will it contribute to profit? That single question has always determined whether we will buy equipment.

WJI: Is the skill set needed to be successful any different today than it was in past eras?

Ramos: The skill set of a successful entrepreneur will be the same, regardless of era: innovation is a must, and it has to be a continuous process, a function of leadership. You have to think outside of the box, navigate uncharted territories, display self-discipline, and have the courage and inner strength to never give up, even when facing overwhelming adversity. You see that in great entrepreneurs in any era, in people such as Steve Jobs of Apple and Elon Musk of PayPal, SpaceX and Tesla Motors.

WJI: You grew a company from the proverbial shoestring: could that still happen?

Ramos: I believe that when there is a will, there is a way, although it would be far more difficult today. Back in 1974, when I founded my company with $168, I did notb face off-shore competition. Nor was I burdened with heavy regulations that are detrimental to business in time and money, especially ones that are small or medium-size. I feel another challenge was the U.S. decision to open China as a fair-trading partner.Before this change, our company sold 100,000 of our innovative Tiny Tiger compact jumper cables to a large retailer. After the change, my product was copied and the next order went to a competitor importing from China. In that period, wire and cable products that were sold in volume became extremely competitive. Many U.S. wire and cable manufacturers, like Philatron, that refused to import, and tried to compete against China, either went out of business or were acquired by mega corporations. We survived because we re-engineered into a custom manufacturer and a niche marketer.

WJI: Has your company ever considered expansion by acquisitions, or do you just prefer organic growth?

Ramos: Expansion by acquisitions are deep financial decisions which require thorough due diligence. In the future we may explore this type of growth. I have relied on organic growth because our innovation has made us successful in new niche markets, such as aerospace. We are very optimistic for good continued growth in this aerospace market because we are the only U.S. manufacturer that completely makes all components of aircraft ground electrical cable assemblies, including copper fabrication, insulating, CNC machining and compression molding. Our competitors outsource components and their assembly.

WJI: In what ways has the wire and cable industry most changed…and least changed?

Ramos: The industry has mostly changed due to globalization. It is far more competitive and many of the small players have been acquired by mega conglomerates. Where it has changed the least is in the method of manufacturing basics, including copper drawing, copper bunching, copper roping, cabling, thermo-plastic and thermoset extrusion, injection molding, assembly, etc.

WJI: Have you had offers for your company, and if so, did you ever give it serious consideration?

Ramos: I probably average a notice of interest once a month from someone who is interested in purchasing my company. Due to my desire to keep on innovating and grow new markets, I have not given this serious consideration, but if a firm is willing to pay a premium based on my future growth, I am willing to talk. I happen to love working and will probably never retire. So even if I did sell my company, I would become busy in other areas. I love manufacturing.

Phil Ramos, Jr., has served on many nonprofit boards and won many awards over the years in recognition of his contributions. In 2008 Philatron won the Medium Family Owned Business or Year Award from the Orange County Family Business Council. He received a standing ovation for a speech on Innovative Leadership at the USC Galen Center (on website). He was the 2007 winner of United States Tennis Association- Southern California 7.0 Division – Men’s Doubles – Super Senior League.